While You are playing with your little child, laughing with him heartily, and in the midst of your happy moment, you notice something wrong in his smile. You stop for a while to recognize the problem. It seems like a teeth misalignment
If you've noticed your child's incisors coming in behind his lower front teeth, then you should know that he's suffering from Anterior Cross Bite which is an orthodontic problem.
The name is derived from the fact that the upper incisors should normally be located in front of the lower front teeth, not the opposite.
The Anterior Cross Bite is also commonly known as chin protrusion and is spread by 1 to 4% in the white Caucasian race, while the percentage increases in East Asia and Africa. 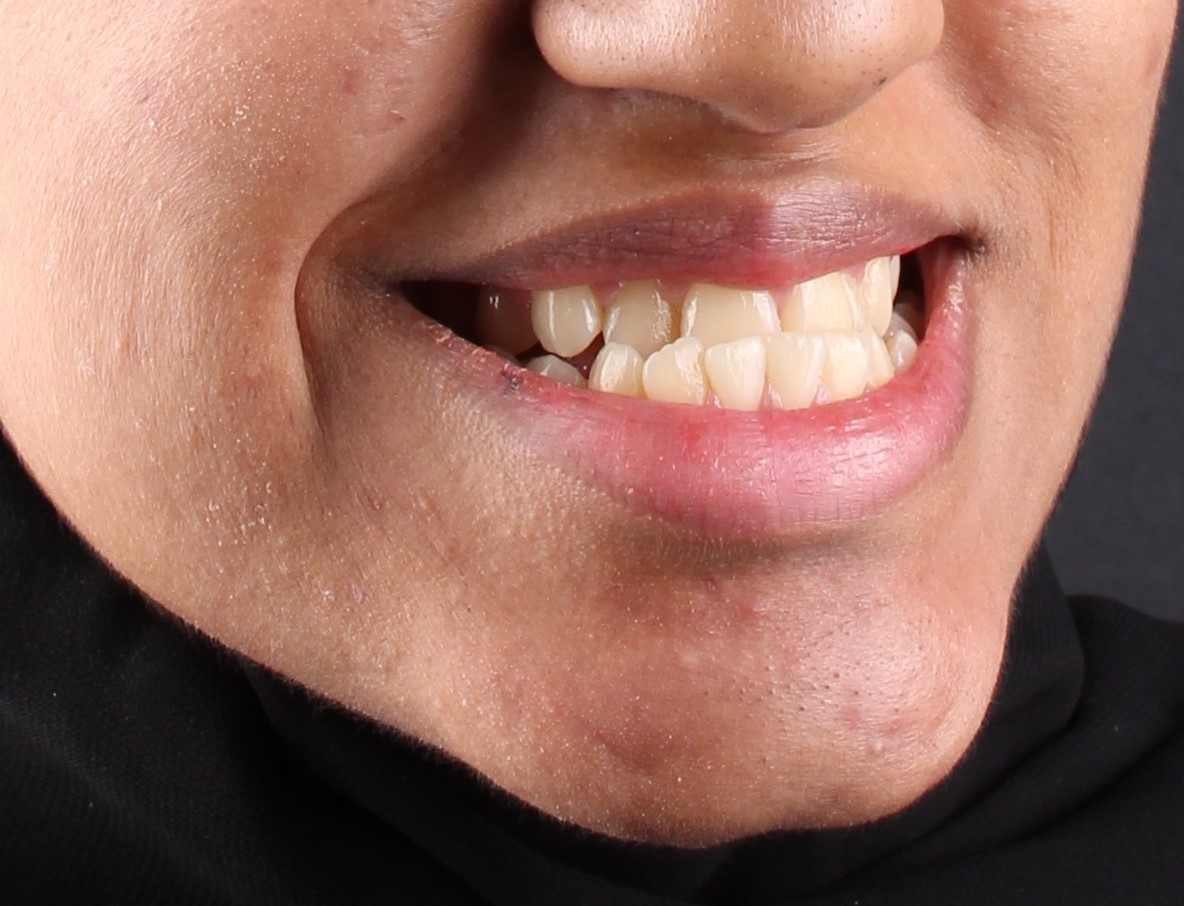 But it is worth mentioning that not all anterior crossbite cases are the same since they differ according to the case causes and severity.
In general, anterior crossbite cases can be classified according to the causative factors into:
•Anterior crossbite caused by the teeth:
This occurs mainly due to a backward tilt in one or more of the upper incisors, caused by a problem in the direction of tooth eruption. In this case, the jaw's position has no role in the crossbite. This case might occur due to several reasons:
1-The severe tooth crowding, which forces the front teeth to erupt tilted backward to their normal position, seeking to find a place for them between the teeth
2-The presence of extra teeth, which prevents the front teeth from erupting naturally, and may sometimes cause them to erupt backward their normal position.
3-The lasting of front primary teeth long after their natural fallout timing, might force the permanent front teeth - that haven't erupted yet - to erupt behind the primary teeth in some cases. 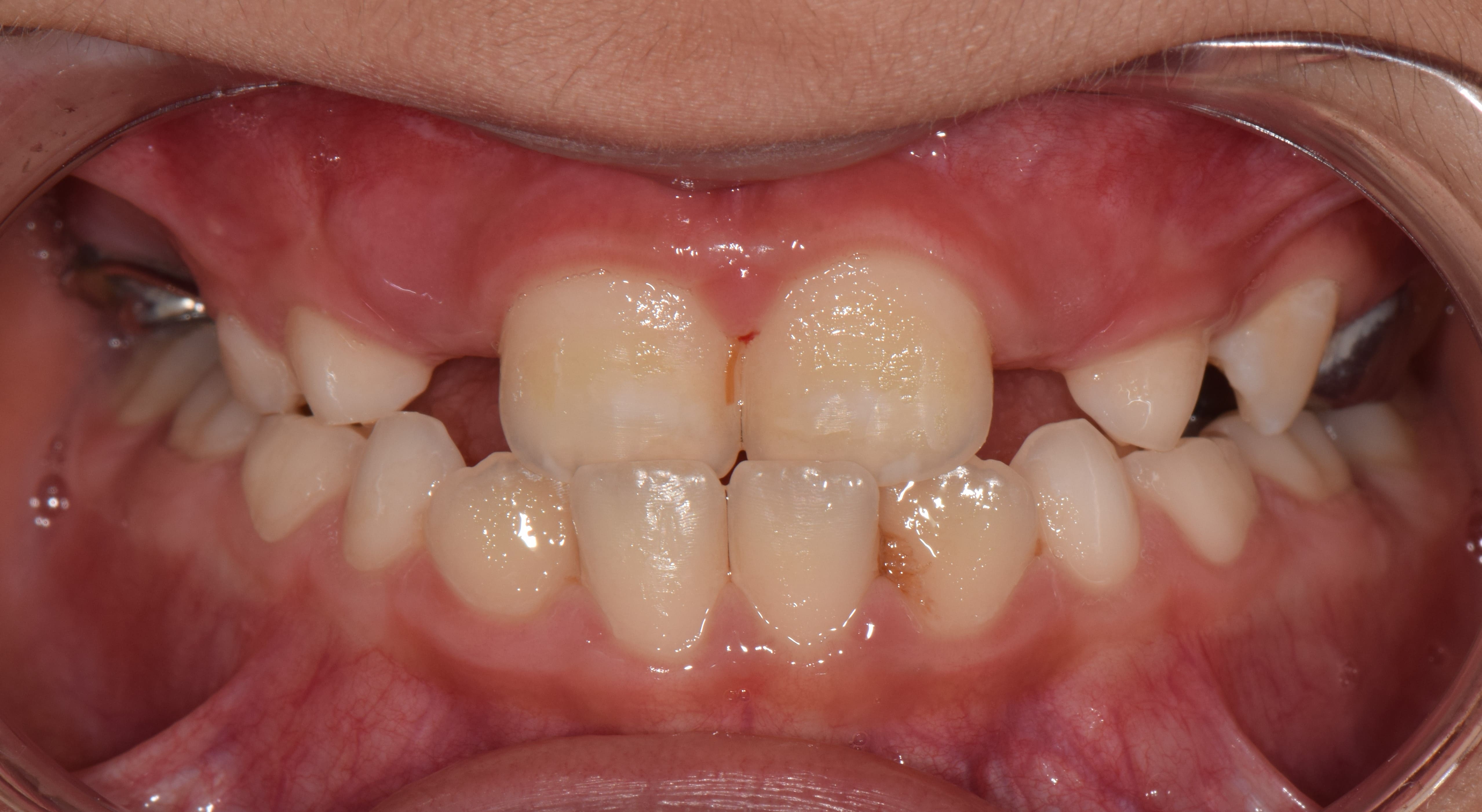 The presence of the anterior crossbite problem -on one or several teeth- for a long time without treatment impedes the upper jaw's forward and down growth, while the lower jaw continues its normal forward growth. This eventually will convert the Anterior crossbite caused by teeth-which can be treated simply – into Skeletal Anterior crossbite (Caused by jaw problems) which needs a more complicated treatment plan.
•Anterior crossbite due to a problem with one or both jaws
This problem arises due to one of the following reasons:
1-The chin protrusion, and excessive forward growth of the lower jaw, (it is commonly called a real chin protrusion, and is called “progenie” in Latin, which is derived from the two syllables: pro which means anterior, and genie meaning chin. 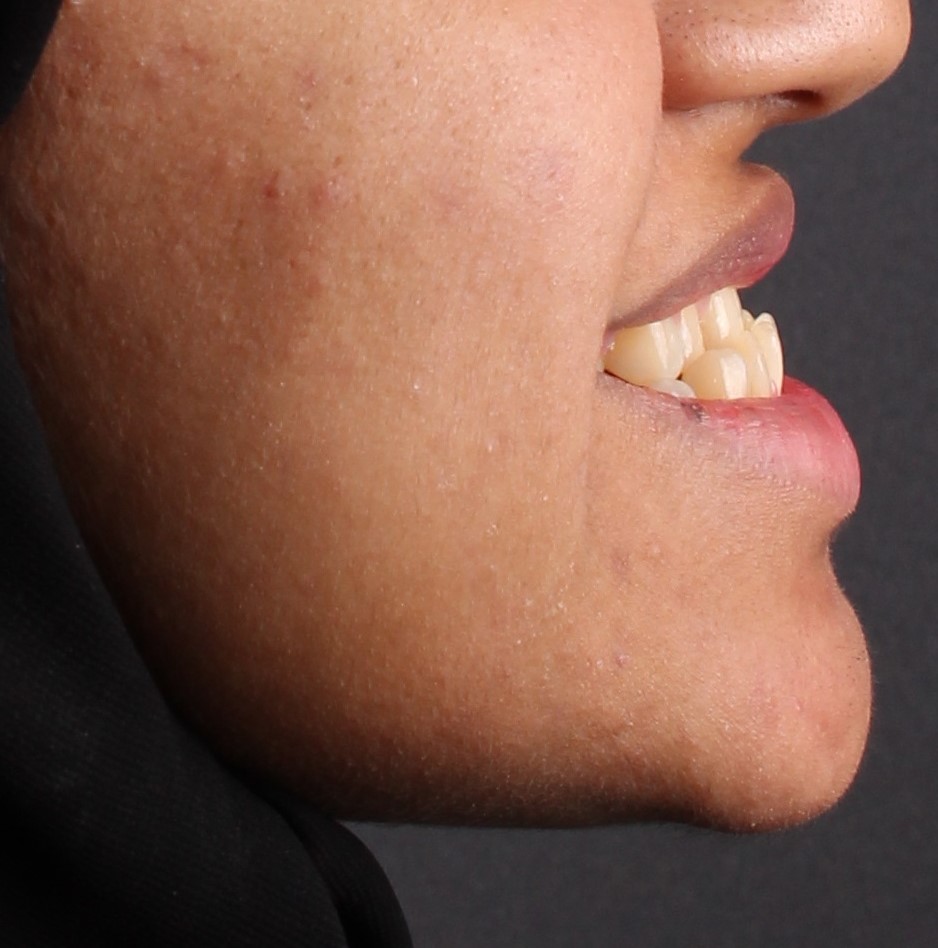 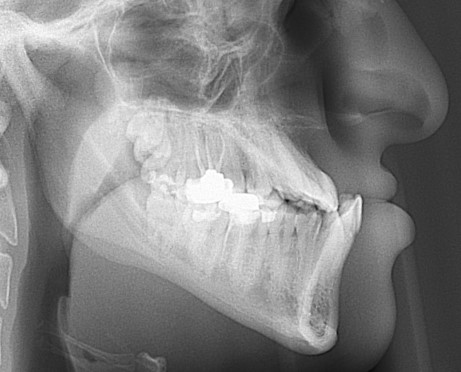 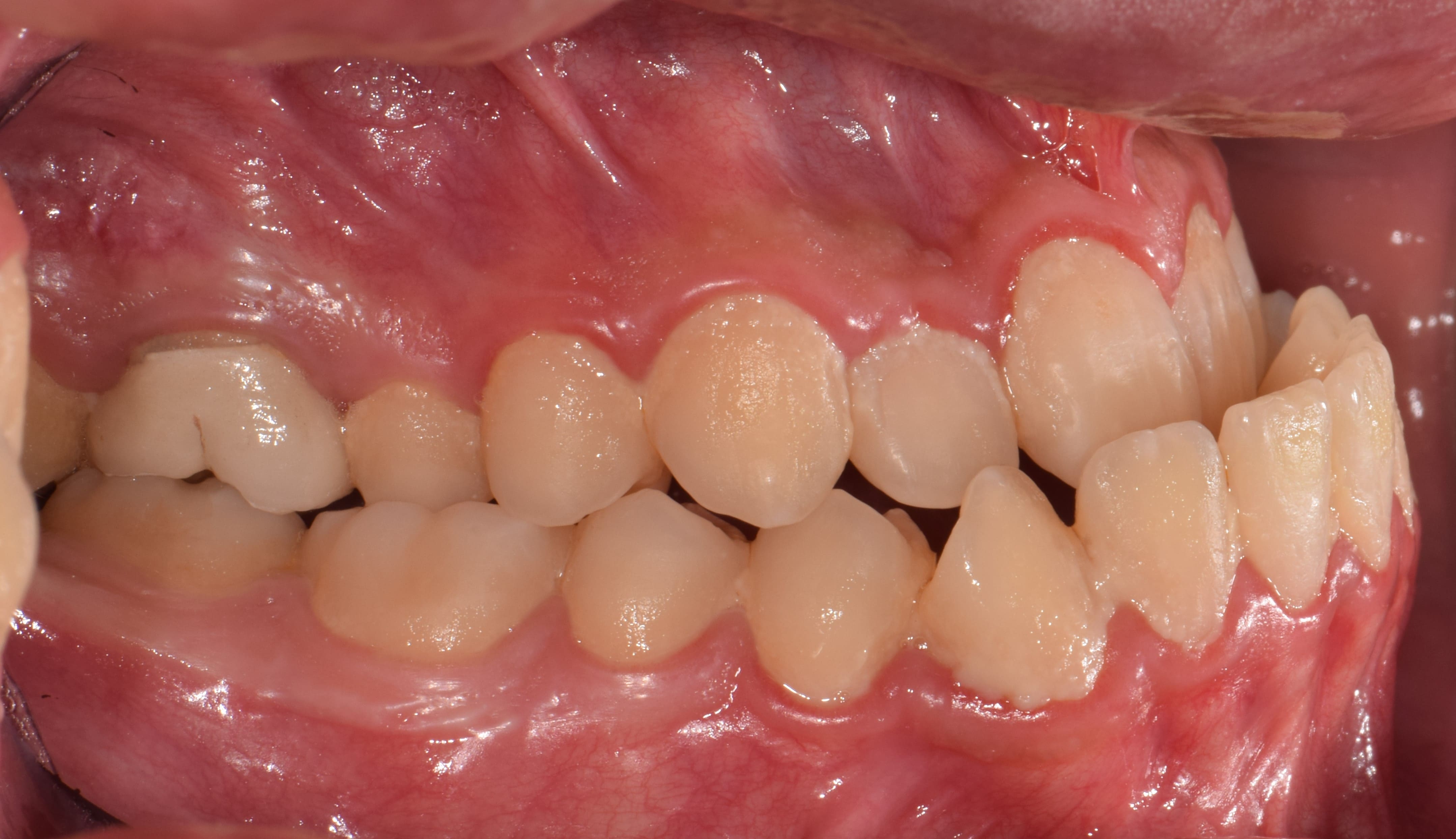 4- Anterior crossbite due to forced mandibular protrusion or functional protrusion. In this case, the lower jaw is normal, but the presence of occlusal interferences (Such as backward maxillary incisors, high dental fillings, or misplaced teeth) leads to the lower jaw's forward sliding when the mouth is closed.

• Anterior crossbite may also arise due to the occurrence of both teeth and jawbone problems together.

Now that you know that an Anterior crossbite arises either because of a problem in the teeth alignment, a problem in the jawbone, or a forced mandibular protrusion, you must be wondering why the mentioned problems appear in the teeth and/or jaws.
In fact, these dental problems result from several reasons, the most important of which are:
1- Genetics:
The genetic factor has a significant role in the lower jaw's protrusion, either directly or indirectly.
• The direct role of Genetics:
Statistics indicate that families with members suffering from mandibular prognathism, develop the likelihood of another member's affected by the same problem at a higher rate than the normal.
Another study confirmed that one-third of all children with mandibular prognathism have a parent suffering from the same problem, and about one-sixth of them has a brother, sister, or relative who suffers from the same problem or has a tendency towards it.

The following image shows Charles IV, King of Spain, his wife (cousin) Marie Jose, Princess of Parma, and 5 of their seven children (the parents and 3 of their children suffer from the protrusion in the lower jaw). 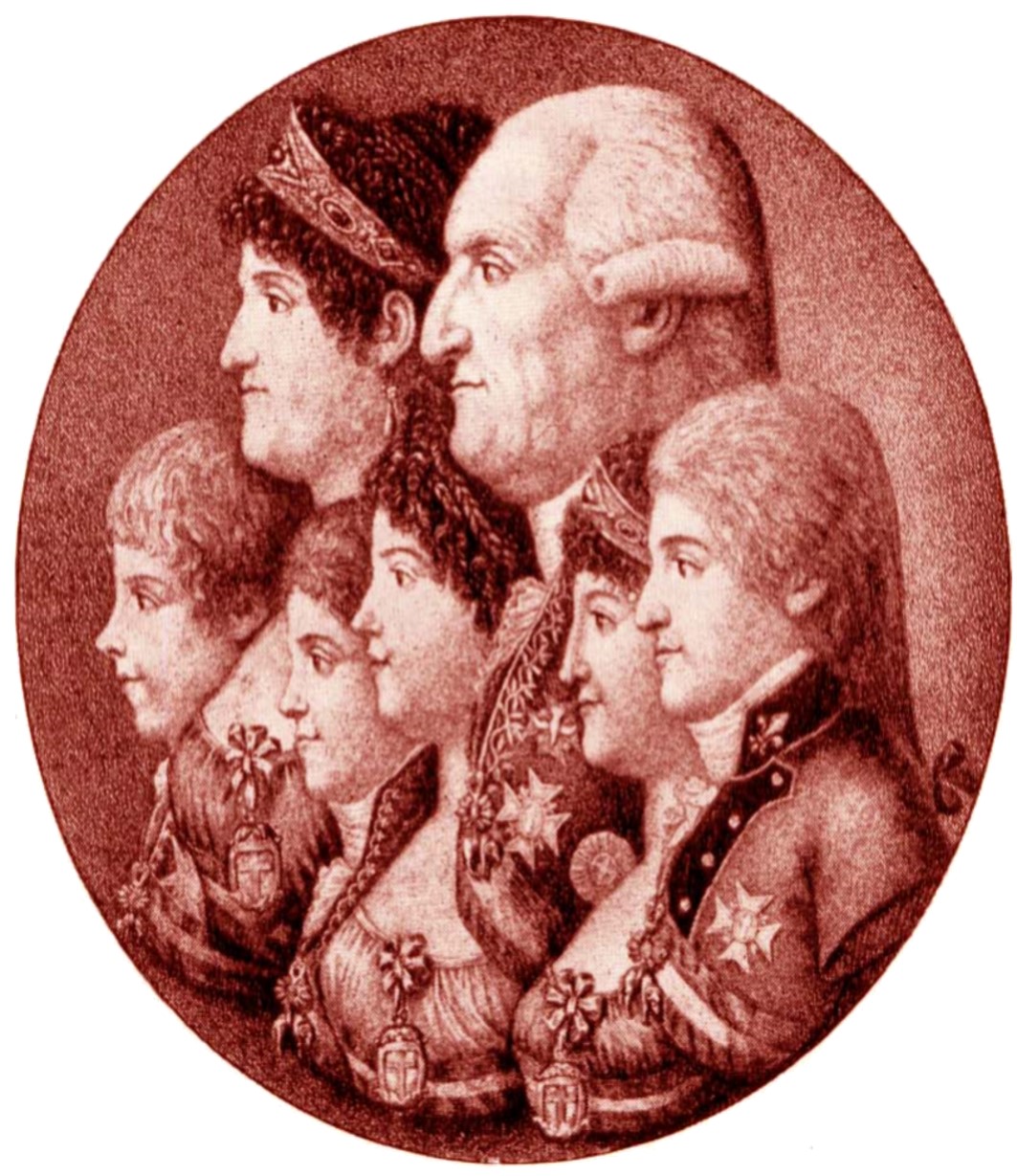 • Indirect Role of genetics:
A missing of one or more of the anterior teeth (mostly the upper lateral incisors) might occur due to a genetic defect, leading to a lack of growth in the upper jaw's anterior part.
Some children suffer from problems with other genetic causes, such as cleft lip and palate (the cleft lip). In some cases, when the cleft extends to the anterior region of the upper jaw, it might cause a lack of growth in this region, resulting in an anterior crossbite, which is caused by the retraction of the upper jaw (and not due to the lower jaw's protrusion)

2- Hormonal causes:
The pituitary gland secretes growth hormone, whose name tells us about its critical role in the growth process. But sometimes, this gland becomes overactive and secretes bigger amounts of this hormone than normal, and if this happens after the end of puberty, it might lead to a disease called “Acromegaly”.
One of these disease symptoms is the excessive increase in the bone-ends growth, and among the parts that grow excessively the lower jaw. Patients do not usually have any related symptoms during childhood, but these symptoms begin to appear suddenly after puberty. 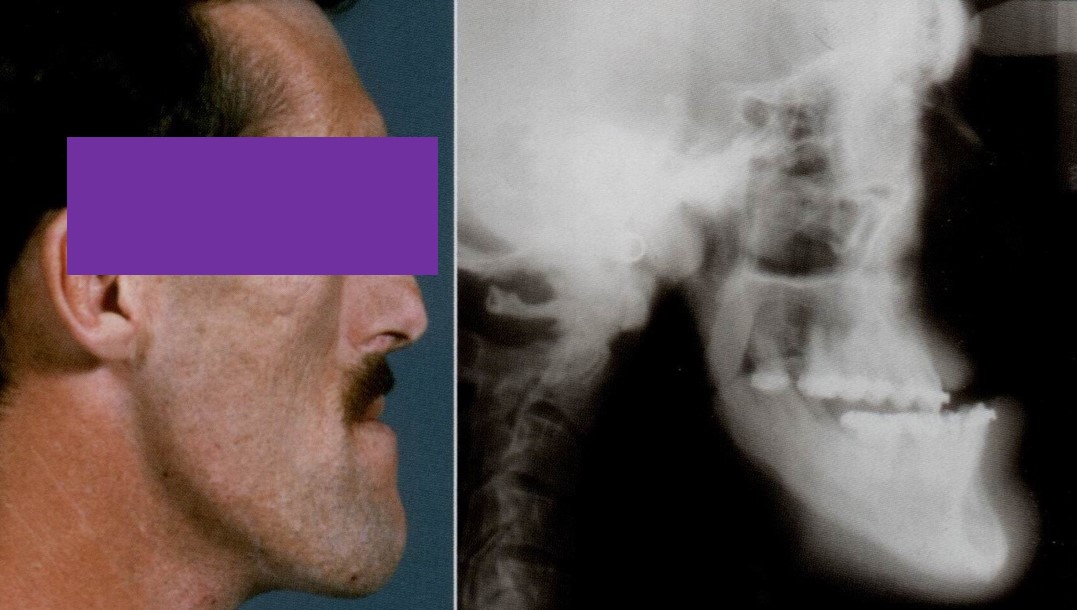 D- Some bad habits in children, such as inverted finger sucking.
E- The habits of the upper lip biting, or the excessive nails biting, may lead to crossbites in some of the front teeth

4- Problems in the milk teeth (eruption or alignment) in children, or the presence of high fillings that force the lower jaw to slide forward. The long persistence of this type of problem may lead to their transformation from a temporary problem - that can be treated by eliminating the cause - to a real protrusion in the lower jaw.

Anterior crossbite treatments range from simple procedures -such as removing the obstacles that force the lower jaw's forward movement- to complex treatment plans -including surgery in one or both of the jaws-. Also, orthodontic treatments vary depending on the patient's age, the source of the problem, and its severity.
It is preferable to start treating anterior crossbite at an early age, especially when the lower jaw's protrusion is not genetic - We often need surgery for ages older than 18 - for this reason, it is necessary to start the periodic visits to the pediatrician or orthodontist from the age of 6 years.
When the crossbite is caused by a backward tilt in the front teeth, then treatment can be done by fixed or movable orthodontic devices, in order to adjust the teeth' positions, and open space for the jaws to continue their growth naturally. 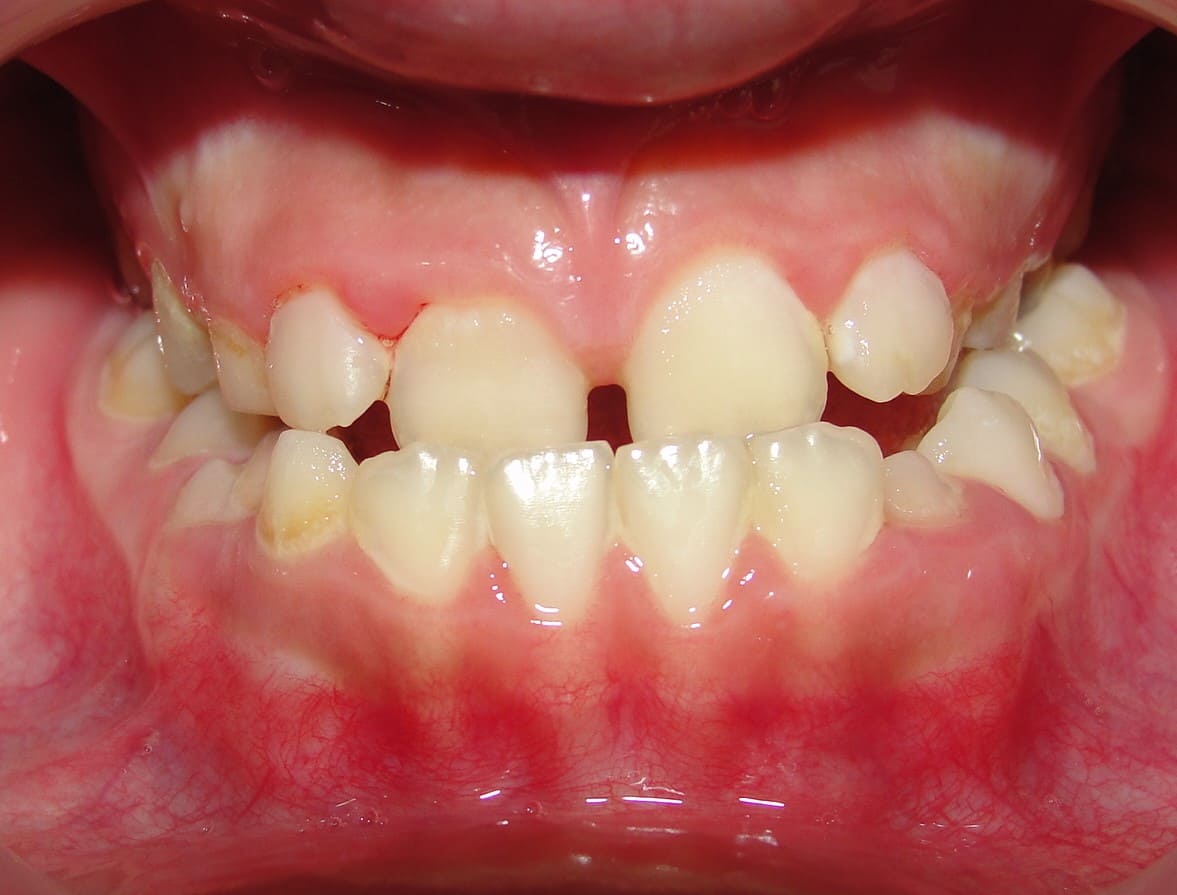 But when the problem is caused by the upper jaw retrusion, a special device called a “face mask” can be applied, which is preferable to apply for ages between 7 to 9 years. The role of this device is to pull the upper jaw and teeth forward, but applying it for ages older than 9 or 10 years might not give the desired result. 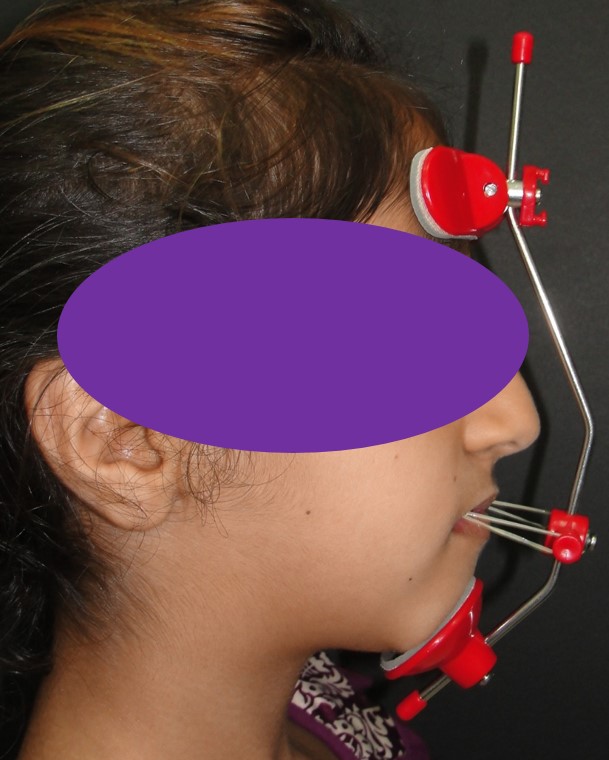 While for ages older than 11 years - at the end of the milk teeth replacement phase - and if the origin of anterior crossbite was mainly from the teeth, then we will treat the case through fixed orthodontic braces (Brackets) which are usually accompanied by the extraction of two posterior teeth in the lower jaw, in order to provide enough space to return the lower front teeth backward, and correct the problem. 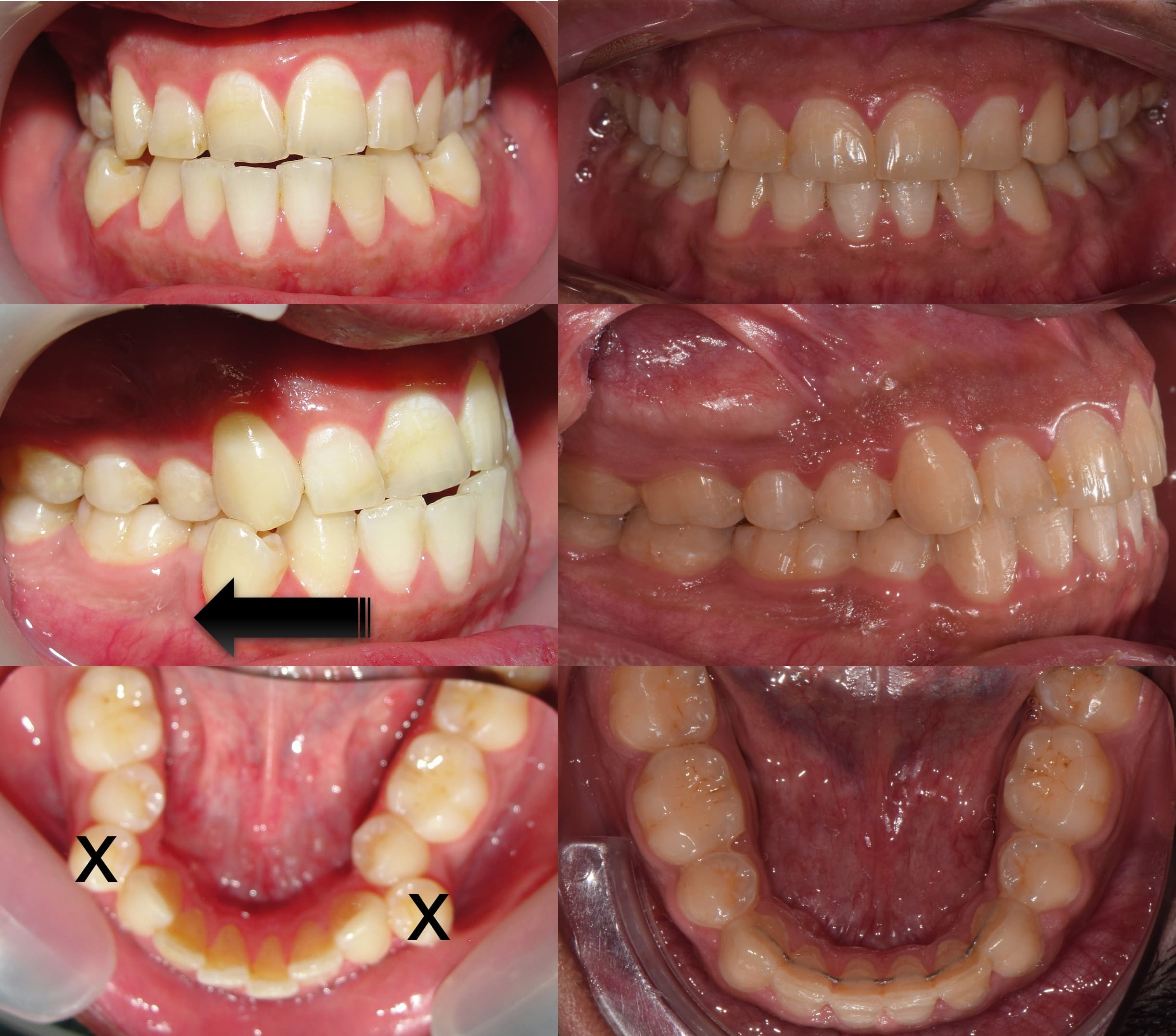 If the crossbite is severe and is originated from a problem in one or both jaws, then it is better to go for surgery in addition to the orthodontic braces. Surgery is often performed after the age of 18, in order to ensure the end of the patient’s growth phase - we will talk in more detail about orthodontic surgery in an upcoming article - but what is important to know is that these surgeries have become a common procedure that does not only improve the patients' occlusion and teeth alignment but also improves the patients' facial profile and smile.
At the end of this article, we should note again the importance of children's early visit to the orthodontist between the ages of 6-7 years, because early orthodontic intervention -in the event of cross-bite diagnosis in children- can save a lot of time and money, in comparison to treating the problem after its aggravation and the patient's growth. It should also be noted that the anterior crossbite is a result and not a cause, as there are many causes for crossbite, and thus treatment methods may differ from one patient to another accordingly, and the appropriate treatment for a child or adult may not be suitable for another child or adult, although both patients suffer from the same problem, the anterior crossbite.
__